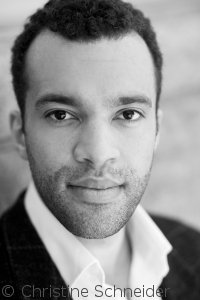 Between 1992 und 1997 this Munich native was a member of the Tölz Boys' Choir. He received a diploma from the University for Music and Theater in Munich in 2011, and is currently studying for a master's degree under Thomas Quasthoff at the University for Music Hanns Eisler in Berlin. Thomas Stimmel has dedicated artistic focus to the art of the Lied, and has already performed Schuber's song cycle Die Winterreise and Schumann's Liederkreis Op. 39 numerous times. His concert repertoire encompasses works from Handel's Messiah to Bach's Christmas Oratorio and Passion of St. Matthew, Mozart's Requiem to Haydn's The Creation, as well Mendelssohn's great oratorios. Under the musical direction of Michael Hofstetter he portrayed the role of Astolfo in Vivaldi's Orlando furioso, in a staging by Christof Nel at the Munich Prince Regent's Theater in 2009, where he also sang the role of Don Alfonso in Mozart's Così fan tutte in 2010. In 2011 he debuted at the Berlin State Opera Unter den Linden in Rosamund Gilmore's production of the Peter Eötvös opera Tri Sestri (Three Sisters) under the baton of Julien Salemkour. He was heard in Koblenz in 2012 in Haydn's Theresienmesse, and in the contemporary production of Joseph Schuster's comic opera Il marito indolente at the Regensburg Tage Alte Musik Festival, in a staging by Dominick Wilgenbus. He is a recipient of a cultural grant from the Bad Tölz-Wolfratshausen (Bavaria) district.

Thomas Stimmel debuted with I VIRTUOSI AMBULANTI E.V. in the role of Montano in the public premiere of Weigl's salon cantata Il Sacrifizio.