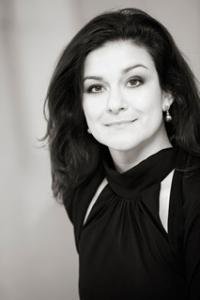 The Swedish-Egyptian soprano Hélène Lindqvist studied in Stockholm, at the Mozarteum in Salzburg, and at the University of Music in Saarbrücken. At the Hamburg State Opera she sang the roles of Fortuna and Damigella in Monteverdi's L'incoronazione di Poppea, conducted by Alessandro de Marchi. She appeared as Ilia in Mozart's Idomeneo and as Ännchen in Weber's Freischütz with the Saarland State Opera. She was engaged at the Theater Ulm from 2006-2009, where she sang roles in Mozart's Le nozze di Figaro and Die Entführung aus dem Serail, the title role in Handel's Alcina, Gilda in Verdi's Rigoletto, and Fiorilla in Rossini's Il Turco in Italia to great acclaim. She guested at the houses in Augsburg and Regensburg as Verdi's Gilda, and sang the role of Tatjana in Tchaikovsky's Eugene Onegin at the latter. She is also a sought-after recital and concert singer: her repertoire spans from Bach to Boulanger. In 2011, she bowed with the Ensemble Symphonique Neuchâtel (Switzerland) in Britten's cantata Phaedra. She is featured on many recordings, including the Jugendlieder by Berg (col-legno, 2002), the Symphony No. 4 of Mahler in a chamber version by Erwin Stein (Neos, 2004), as well as a new song recital CD with her regular collaborator, pianist Philipp Vogler, entitled Persian Love Songs, which features the first recordings of songs by Anton Rubinstein. Also in 2011, she and Philipp founded The Art Song Project, an online resource for recordings of songs by unknown great composers.

Hélène Lindqvist joined I VIRTUOSI AMBULANTI E.V. for the public premiere of Weigl's salon cantata Il Sacrifizio in the role of Nerina.